So when I spotted this bizarre invention that's powered by lithium-ion batteries it ticked both boxes for blogs on the two websites. Here's the photo that sparked it all and the blog. 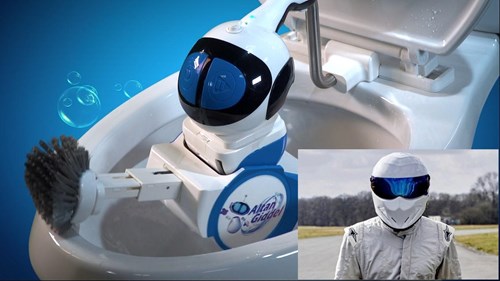 Don’t giggle over Giddel, the robot that cleans your toilet

Lithium-ion batteries seem to be powering just about anything these days … but could you ever imagine they’d do this?

For they are now used to make a robot work … to clean your toilet.

Not exactly a snip at almost $500 – and the multi-millionaire entrepreneurs in Dragon’s Den would no doubt fall off their chairs laughing – it has to be just about the ultimate in laziness for those who, let’s face it, can’t be bothered and, as my dad used to say, have “more brass than wit.”

The toilet robot’s name is Giddel – which is dangerously close to giggle – and has been devised by USA company Altan Robotech. It bears an uncanny resemblance to mysterious Top Gear TV driver The Stig.

The cordless, lithium-ion-powered robot clips onto its specially-designed toilet seat which is included in the price, and goes to town on all aspects the rim. And because it's hanging onto the seat, it never actually touches the water. Its manufacturer claims this means you don't have to replace toilet cleaning with the new task of giving your robot a bath.

Altan Robotech’s chief executive Alfred D’Souza said: “With Giddel in a family’s home, people no longer have to do the mundane and disgusting task of cleaning a toilet bowl. Instead, they can focus on spending time with loved ones. That is why we developed Giddel, because your FAMILY MATTERS to us.”

I especially like the needless use of capital letters here. Of course, you could simply don your marigolds, give it a quick brush round and be $500 better off to spend on the family.

Then there’s the issue of who cleans Giddel’s brush and wouldn’t it drip on the carpets as you moved if from toilet to toilet? You’d ‘loos’ out there (sorry).

And what happens if Giddel’s into its 5-minute cycle and you get caught short?  That would well and truly put Giddel in the firing line.

The disclaimer here is a beauty: “The portable toilet cleaning robot has been tested in a laboratory setting to clean three toilets every week for over three years. (Note: actual conditions may vary performance).”

One final thought. If the drains get flooded and all the sewage gets backed up it can explode out of the toilet.

Giddel would be out of its depth with that clean-up job but if you pop a FloodSax sandless sandbag down it would keep the mess where it belongs … in the drains.