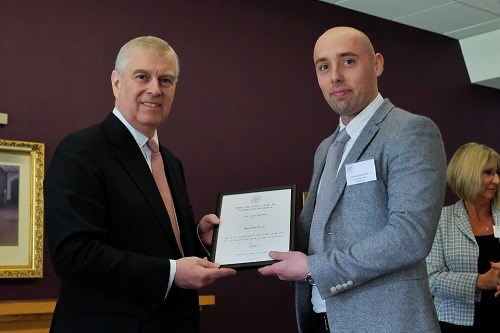 Andy Hirst filled in the forms for the award and then wrote this press release which was used in The Huddersfield Daily Examiner.

To see the story online at the Examiner go to https://www.examinerlive.co.uk/news/west-yorkshire-news/royal-seal-approval-waves-day-16101822

And here it is in full.

A Colne Valley day care centre has won a major Royal award for the way it has harnessed the support of the community.

Waves members and staff met Prince Andrew when he presented them with a Duke of York Community Initiative award in a special ceremony at Catterick Garrison in North Yorkshire.

It is given to organisations which show the real difference that can be made to people’s lives by the whole community working together and Waves is right at the heart of the community in Slaithwaite.

Its members have learning and/or physical disabilities yet many work for a few hours each week in businesses in the Colne Valley which is a massive boost to the members’ self-esteem and also debunks many myths surrounding disabled people.

Waves managing director Ben Wright said: “Waves has been in Slaithwaite for 10 years and it’s amazing how the businesses and people in the Colne Valley have taken its members to their hearts.

“Thankfully we live in a society where disabled people have had the chance to integrate like never before but the Colne Valley has taken it to a different level thanks to the kind-hearted businesses we have here who value everyone who crosses their door and has given our members the chance to widen the scope of their experience, self-esteem and opportunities in life.”

Waves has been one of the most pioneering day care centres in the country, taking what it offers its members to another level.

It even has its own pet centre with everything from a tarantula to rabbits. Waves members have the chance to go on holidays ranging from a remote Scottish island to Disneyland in Paris.

When Waves opened in 2010 it had just seven members but within a year had won the Community Project category at the Huddersfield Examiner Community Awards. It now has 130 members … and the number is always growing.

Ben added: “To win this Royal award is truly amazing and a testament to the support we’ve had from the businesses and wonderful people within the Colne Valley. It means that people who were once wrongly marginalised on the edge of society are now an integral part of it and we know from feedback from the businesses that our members who help out there are much loved by both their staff and customers.”

The Duke of York said: “The Community Initiative is a great success story throughout the whole of Yorkshire with over 400 first class community schemes having received my award. They have been encouraged informally to act as mentors and examples of best practice to other communities, spreading far and wide the message that often the remedy for short comings can be generated at community level.”

The award can also help winning organisations to apply for grants.

*Any businesses that can offer placements to Waves members for a few hours one day each week should contact Ben on 01484 769734.