How AH! PR helped a young fashion designer into the media spotlight 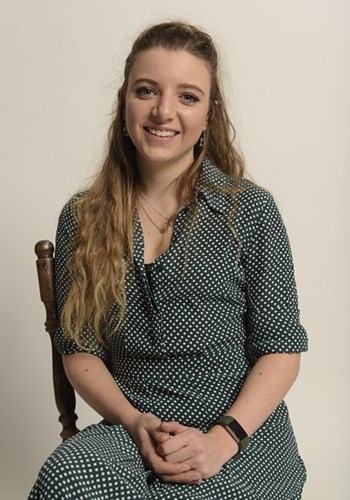 When Andy Hirst heard about Eleanor Bradley's no-nonsense stance on environmentally-friendly fashion design he offered to help her get some publicity for free ... and here's the result.

This is the link to the Huddersfield Examiner feature with the press release printed in full below.

The fast-paced world of fashion often has a here today, gone tomorrow mentality … and with that a huge environmental impact.

A young fashion designer fed up of the impact this has on the planet wanted to work for an ethically-minded fashion company … but couldn’t find one to match her expectations.

So 22-year-old Eleanor Bradley has now taken the plunge and set up her own fashion house in her home town of Huddersfield.

Eleanor, of Slaithwaite, said: “If I asked people to name the second largest polluter in the world after the oil industry I think very few, if any, would correctly guess it’s the fashion industry … but it is and the environmental damage is increasing as the industry grows.

“The only way we can change this is to bring it into the public consciousness and people being willing to change. So often we are faced with a ‘buy, buy, buy’ fashion mantra to buy clothes at unbelievably low prices and that’s what’s wrong with the fast fashion industry with brands competing with each other to make the cheapest, fastest-selling garment to increase purchases and drive sales.

“But who needs that cheap fashion item that’s here today and gone tomorrow? The short answer is no-one but we're all a sucker for a bargain so people buy a garment because it's there and because it's cheap without considering the impact their purchase will have on the earth. Often these garments will outlive 67% of the endangered species we're on course to lose this century and the majority of their make-up is polyester, a fabric which is incredibly harmful and can release plastic microfibres into the air and environment just by being worn or washed.”

According to the environmental website Sustain Your Style: “In most of the countries in which garments are produced, untreated toxic waste waters from textiles factories are dumped directly into the rivers.

“Waste water contains toxic substances such as lead, mercury and arsenic, among others. These are extremely harmful for the aquatic life and the health of the millions of people living by those river banks. The contamination also reaches the sea and eventually spreads around the globe.

“Another major source of water contamination is the use of fertilizers for cotton production which heavily pollutes run-off waters and evaporation waters.”

Eleanor, who graduated from the University of Central Lancashire with a first class degree in fashion design, says: “People can do something about this simply by making conscious, informed choices. So only buy clothes made in countries with stricter environmental regulations for factories such as the European Union, the USA and Canada and always choose organic fibres and natural fibres that don’t require chemicals to be produced.”

Sustain Your Style also says the fashion industry produces 10% of all global carbon emissions and 190,000 tons of textile micro-plastic fibres that end up in our oceans every year.

Eleanor is leading the way by example. Her company, Wild Strings, is committed to reusing as much of its fabric off-cuts as possible by using them within its garments – off-cuts that would usually be just thrown away.

“With 5.2% of landfill waste made up of textiles, fabric off-cuts can be used to make contrast linings and panels to reduce the amount of waste textiles we contribute to the environment,” she said. “Any fabric remnants not used are saved for use in the future.

“We are very conscious of the fabrics we use, trying to find a balance between quality, wearable fabrics while improving as much of our environmental impact as possible. For this reason we use natural fibres and try our best to stay away from synthetic-based fabrics like polyester.”

The T-shirts Eleanor designs are 100% recycled, made from 60% recycled cotton and 40% recycled polyester which carry a Global Recycle Standard (GRS) certification. Salvage products like this are also Fair Wear certified, meaning the pay and conditions of those producing these T-Shirts are fair and just. The Fair Wear Foundation is an independent, non-profit organisation that has been set up specifically to improve working conditions in the garment industry.

Eleanor only uses recyclable tissue paper and boxes to send out her garments and she keeps well away from plastics.

She says people must move away from a ‘wear it and throw it away mentality’ and insists that people need to be honest with themselves.

“If you don’t think you’re going to wear that purchase more than a couple of times it isn’t worth buying,” she said. “We really believe that clothes should be worn again and again and loved for a lifetime.  According to Greenpeace, doubling the use of a piece of clothing from one year to two years reduces that piece of clothing’s emissions by 24%.”

And she has a handy tip on how to make your clothes last longer … and keep their colour.

“Wash your clothes at a lower temperature as 90% of the energy used for washing clothes goes into heating the water,” she said. “It also means the colours in your clothes don’t fade as quickly so they will ultimately last longer. Avoid tumble dryers. Drying naturally saves a lot of energy and your clothes actually last longer when you line dry.”

She adds: “When you have finally worn your clothes out then find a textile bank to put them in so they can be recycled. Or, if they are fit to wear, take them to a charity shop. Never throw them in the bin.”

Away from her environmental concerns Eleanor is keen to keep age-old textile skills very much alive and embroidery often features prominently in her designs.

She said: “It gives each garment a uniqueness which isn’t widely found in the modern age, where mass production is rife and gives a human connection between me and the wearer. To me, embroidery gives a much more personal touch and that is something we definitely need in the world right now.”