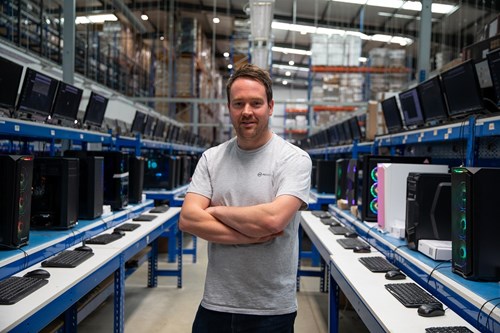 The latest version of a publication featuring the top 100 businesses in Kirklees is now online … and Yorkshire-based journalist, copywriter and blogger Andy Hirst from Huddersfield PR company AH! PR has written a significant part of it

Called Kirklees Top 100 Companies 2021/2022, the publication has features on the top 10 plus many of the best-known business names in the area along with profiles on the highest new entrant, the highest climber and the highest placed SME.

It’s a joint venture between the University of Huddersfield, Kirklees Council, the Huddersfield Examiner and the 3M Buckley Innovation Centre in Huddersfield.

It’s a purely editorial publication to showcase businesses. Kirklees Top 100 puts the district on the map as an attractive destination for inward investment, business start-ups, scale-ups and growth.

Huddersfield Business School did the analysis to produce the list based on companies registered in Kirklees. The list is determined by a combination of turnover, profit, employee numbers and growth, extracted from published information in company accounts.

Andy, who was formerly Head of Content at The Huddersfield Examiner, said: “Until you’ve seen the list you simply don’t realise the incredible companies we have here in Kirklees – some of them are world-leaders at what they do from textiles to engineering and from chemicals to computers.

“The publication also has a major feature on charities as the Kirklees area has a magnificent reputation for its commitment to helping others.”

The ones profiled in Kirklees Top 100 include helping families to get free school uniforms, giving people the chance to own bikes for free, a community foundation dedicated to helping smaller charities, a charity that helps people with dementia and their carers and, finally, one that gives community groups the chance to pitch for money in a Dragon’s Den style scenario.

Andy is known for setting up the Huddersfield Examiner’s Community Awards in 2000 and they ran for 21 years with Andy co-hosting them alongside ITN newsreader Nina Hossain.

One of the most amazing business stories in the publication is about PCSpecialist Ltd, based at Grange Moor near Huddersfield.

The company’s story began when Danny Williams started his own computer business in his bedroom when he was a 17-year-old student at Greenhead College in Huddersfield.

He was due to go to the University of Leeds to study a business degree but realised his own business may be a goer when he built and sold four computers a week, so he carried on with it instead.

He’s now 36 and his Grange Moor business, PCSpecialist Ltd (https://www.pcspecialist.co.uk/), had a turnover of £102.6m last year - up from £66.2m in 2019 - and employs 235 people. The company only operates online and specialises in top quality computers for businesses and gaming enthusiasts and is now delivering a computer somewhere in Europe every 5 minutes – that’s more than 100,000 a year.

Apart from selling direct, the company’s products are also sold through huge names such as Currys PC World and Very.

To get a PDF copy simply email at andy@ah-pr.com and he’ll email it to you.