A charity which provides free school uniform to families in need is busier than ever due to the impact Covid-19 has wreaked on communities across Huddersfield.

Uniform Exchange has seen a 40% surge in demand over the last year yet founder Kate France fears hundreds of tonnes of school uniform is still being thrown away in Huddersfield every year … uniform which could enhance the lives of other youngsters.

The charity – which marks its 10th anniversary next month (June) – has made it even easier for people in need to get the free school uniform with an online application form https://www.uniform-exchange.org/free-school-uniform/ on its website. 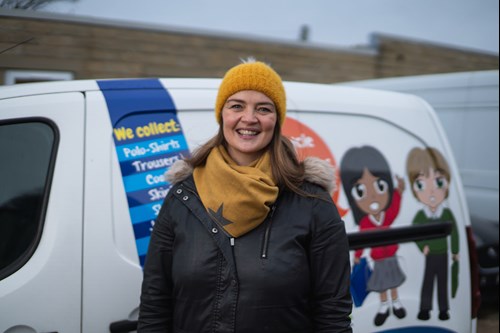 Kate said: “It used to be that families had to be referred to us for free school uniform but some felt there was a stigma to that so wouldn’t use our service because they didn’t want to ask for help. We’ve seen a big increase in demand which we’re sure is linked to the impact coronavirus has had on people’s finances.

“We were often providing uniform in the more socially deprived areas of Huddersfield but that need has definitely spread. People running their own small businesses, for example, have been hit hard and not everyone has been eligible for the Government financial support packages.

“When people struggle to make ends meet they’re forced to look around to see what help is available which is why more people are turning to us.”

There are 90,000 youngsters of school age across Kirklees and they wear an estimated 630 tonnes of school uniform every year. Kate says Uniform Exchange ends up with around 50 tonnes which means an awful lot could potentially be going into landfill.

Most Year 11 pupils across Huddersfield will be leaving by the end of May so Kate hopes to see an influx of high school uniform in the next few weeks.

She added: “Ironically, due to Covid and the fact that the pupils have not been in school much since March 2020 a lot of their school uniform will be in good condition. Please either pass it on to people you know or send it our way. Don’t, whatever you do, simply throw it away.”

She added: “Young people today are very aware of environmental concerns and one of the biggest is the amount of clothes that are thrown away each year. Some uniform will be reworn or go to siblings or friends but anything else please donate to us. Anything we think can’t be worn straight away or repaired we give to Oxfam and they have a policy to recycle everything. If you give your unwanted school uniform to us you can be assured that none of it will end up in landfill.”

Once people have asked for help and sent in the details of the clothes they need, volunteers at Uniform Exchange pick the uniform for them which is then delivered to their door. Everything is free. Uniform Exchange has delivered around 8,000 bags of school uniform across Kirklees over the last decade. Its main hub where all the donations are collated is in Lockwood where there is 3,000 sq ft of storage space such is the vast scale of the operation. There are plans to open a second hub in Mirfield this summer.

Kate said: “We have one van which is collecting the donations and then delivering the clothes out to families too. Such is the pressure we really need a second van if anyone is willing to help us with one or sponsor it.”

Kate and a group of Huddersfield mums set up Uniform Exchange after they were deeply moved by a BBC1 documentary called Poor Kids screened on June 7, 2011, and the charity was also in response to school uniform grants being cut.

The Prime Minister at the time, David Cameron, had visions for what he called the Big Society and said in the 2010 Conservative manifesto: “How will we revitalise communities unless people stop asking ‘who will fix this?’ and start asking ‘what can I do?’”

Uniform Exchange has done an awful lot since then to help children across Kirklees. 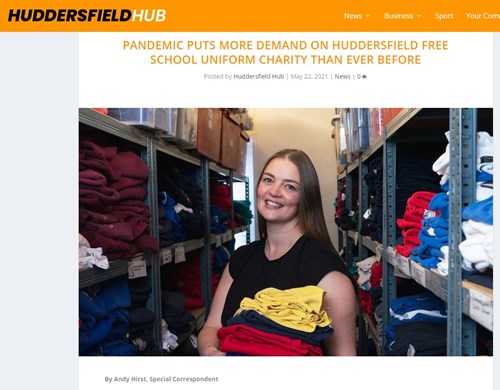 Coverage of the story on the Huddersfield Hub website

The charity needs more collection points in the HD5 postcode (Dalton and Rawthorpe) and the HD8 postcode (Shepley through to Denby Dale and Scissett).

Anyone who can help should email the charity at info@uniform-exchange.org or phone 07955 724789.