Covid-19 is sparking a mental health crisis in Huddersfield with a worrying upsurge in the number of people trying to take their own lives.

Mental health charity Platform 1 has revealed it’s been dealing with an increasing number of people on the brink due to them losing everything in their lives – their jobs and sometimes even their families and homes.

But there is hope as charities such as Platform 1 (www.platform-1.co.uk) and others in the town are working throughout the crisis to offer support during the darkest hours in some people’s lives. 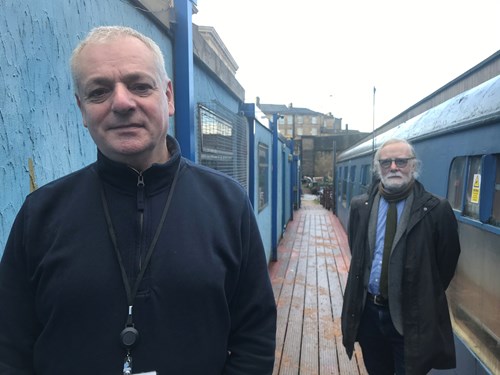 Gez said: “Mental health is not the cliché of a naked man running down a road armed with an axe. Mental health is often rooted in anxiety and depression and the legacy of the pandemic is that the after-effects will be with us for many years.”

He added: “Sometimes the situations we face are so sad. We are dealing with things we never thought we’d ever have to deal with such as the number of attempted suicides which has gone up appallingly and, tragically, in two of them the men have lost their lives. The police have called us out late at night to help with men who have made attempts to take their own lives.”

Frontline services realise the incredible work the eight staff and 17 volunteers at Platform 1 are doing to help people with mental health problems and men are referred to them from just about every professional organisation in the town from community mental health services and GPs to Kirklees Council and the police.

Gez revealed that some of those professionals are now suffering and, having seen how Platform 1 is helping people through their crises, are also turning to the charity which specialises in helping men who have traditionally found it hard to talk or share their feelings, believing they have nowhere else to turn.

Gez said: “The charity has completely changed in terms of the people we help so the service we provide is very different from when we started. In the past it was mainly men with addiction and social issues who were often single and unemployed. Now we are seeing more professional people with homes, families and jobs … or have lost them.

“Many are feeling the strain and are terribly isolated. We wonder if it’s because men usually form friendships through work while women seem to have more long-lasting friendships even from childhood or a wider network of friends.

“There is still a stigma about mental health and people, especially now during a pandemic, are wondering what’s happening to them and don’t immediately realise that the anxiety and depression they are suffering from are mental health issues.

“We are also seeing more mental health problems caused by bereavement. People can see their loved ones through a window but can’t hold them while they are dying and that’s just terrible.

“People are losing their jobs, marriages are being putting under dreadful strain with people splitting up, depression sets in and some turn to drink and other substances to try to cope with what’s happening to them and the world they once knew. Especially with men, once they have lost their jobs they can quickly lose their sense of identity.

“We are seeing men who are completely alone with no family or anyone supporting them.”

Sadly, some of them have learning difficulties and are wrongly being targeted by people within their own communities.

Gez added: “They live alone, pull the curtains across all day and don’t answer the door. Some people jump to entirely the wrong conclusions and falsely believe they may even be paedophiles. We had to support one man who was in this situation and had a vicious dog and weapons in his home to defend himself against what he perceived to be a very real threat.”

Fortunately, such cases are rare and with Platform 1 and the work it does becoming more widely known, it has set up a freephone helpline 0800 066 2828 which is now averaging 70 calls a month. Its base in Huddersfield is a frontline service so has never closed and it’s had to build two more mental health crisis support rooms to meet the extra demand. The staff do more than counselling as they can also help people with everything from benefits to housing and also go to see people in their own homes. 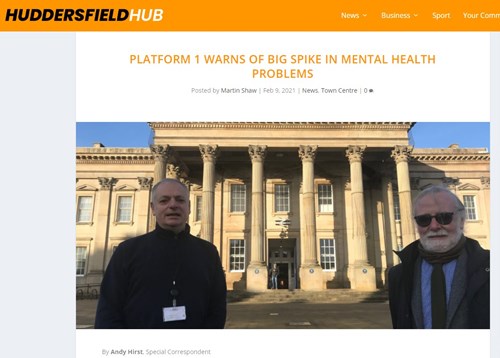 Pic caption: How this story appeared on the Huddersfield Hub website

Project manager Bob Morse added: “With us it’s not a 10-minute appointment and then we’ll see them again in a month. It’s all about constant support and we keep calling them back to see how they’re doing. Some of the staff here are working 60 to 70 hours a week.”

A women’s group has now been set up due to the demand – and some of the women turning to the charity for help have been through the most appalling experiences.

Some of the people Platform 1 helps are also single parents who feel completely isolated with no help from anyone.

Jez said: “We want people in Huddersfield to know there is help out there. There are good people in the community who want to help and make things better for those who need support. We know that as a charity we are making a powerful impact and are trying to change the face of mental health and how it is delivered, but we are still very much aware there are still many people out there struggling in our communities.”

How you can help Platform 1

Funding is always a problem, but people can easily make a donation of just £3. All you need to do is text UCARE 3 to 70085 to donate £3. The way it works is that the text costs £3 but you can donate more this way if you want.