Exclusive with one of D-Day's unsung heroes 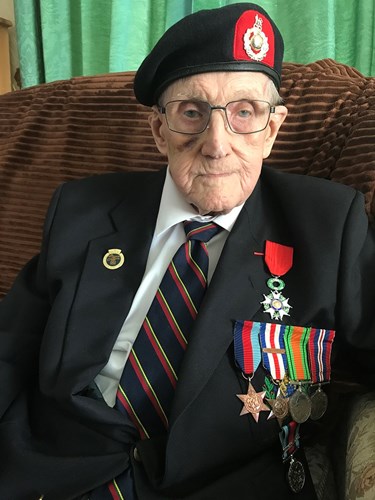 Early on the morning of June 6, 1944, Maurice Sutcliffe and his landing craft crew set off from Chichester harbour near Portsmouth to make the hazardous 100-mile journey across the Channel to land on Juno Beach in Normandy.

The rest of his flotilla had already vanished into the distance before they left harbour. The reason was clear … no-one wanted to be near them.

For Maurice and his crew had been tasked with one of D-Day’s most daunting missions – taking a small landing craft stacked high with four tons of anti-tank shells to the beach invasion.

The mission was crucial to the invasion as the shells would be needed by glider troops ordered to land and hold two vital road bridges – the Ranville bridge across the River Orne and the Benouville bridge over the Caen Canal. Both are five miles from the coast and the route to Caen itself so were the only way British troops landing on Sword Beach could break out from the beaches. One of the bridges later became known as the famous Pegasus bridge and the paratroopers had expected German tanks to arrive quickly to try to win the bridge back – hence the desperate need for Maurice’s anti-tank shells.

If the paratroopers had failed to capture the bridges or the Germans had blown them up it would have left the British 6th Airborne Division cut off from the rest of the Allied armies behind enemy lines. If the Germans had fought off the attack and kept control the bridges could have been used by their armoured divisions to attack the Normandy beaches which could have turned D-Day into a disaster.

Maurice, of Bradford in West Yorkshire, recalls: “No-one wanted to be anywhere near us and that became even more obvious as soon as we reached Juno beach which was right next to Sword beach. Our landing spot was to be directly opposite a road so the shells could quickly be unloaded and rushed to the bridge. From the sea we could see the spire of the church at Bernières-sur-Mer as a pinprick on the horizon at first and then it got nearer and nearer as we approached the beach until it was right next to us and a shell then landed 60 yards away.

“As soon as we reached the shore an officer rushed up to us and shouted that if we were hit the explosion from all the anti-tank shells would kill hundreds of our troops still on the beach so he ordered us to go back into the sea and wait until they were ready to unload us. We had to go a safe distance from the shore although we could have been hit at any time as the Germans were sending over 16-inch shells that were being fired by a large gun mounted on a railway platform that they’d had hidden in a tunnel.”

After a nerve-wracking hour the officer blew his whistle and waved a flag to get them to come back to the beach and unload.

Other soldiers rushed the shells up to the bridges and the paratroopers managed to hold on and keep them intact in a part of the landings codenamed Operation Deadstick.

Shortly afterwards Maurice and his crew went forward into the village where they met a Gendarme who was so pleased to see them he insisted on taking them home to meet his wife and two young children where they toasted the invasion with a bottle of Calvados.

Maurice and his crew went back to their landing craft to discover they had had another dangerous job dumped on them … quite literally. Royal Engineers had cleared German shells and mines and had put them into Maurice’s craft and they were then ordered to take them three miles out to sea and drop them in the water.

Maurice said with wonderful British understatement: “It was a bit of a dodgy business. These munitions must have been potentially unstable and lethal as two Royal Engineers lads joined us and put them in the water ever so gently. “

Despite the overall triumph of D-Day there was a lot of tragedy. Maurice was in Flotilla 604 of the Royal Marines Squadron and there were 16 boats in each flotilla with six flotillas making up the squadron. Each craft had a crew of six. Many were sent back to England once the beaches were secure but it ended in disaster.

Maurice said: “The water was so calm when they set off back but during the journey a vicious gale blew up, turning many of the boats over. We lost 97 lads who had all survived D-Day. I think many of them came from Liverpool.”

Maurice revealed he was lucky to survive a tragic training accident a month before D-Day which killed his crew leader. They were using a winch at sea when their landing craft was hit by a huge wave. The cable snapped and the backlash killed the coxswain instantly and left Maurice with blood pouring from a head wound.

Maurice’s father, Harry Morris Sutcliffe, had served on the destroyer HMS Michael in the Royal Navy during World War One and their ship sunk a U-boat.

Maurice recalls: “The crew got what was known as a bounty for doing that. Each man received extra pay and the sum depended on their rank. Even though dad was an Able Seaman he still got £20 … and that was a lot of money in them days.”

Maurice reveals he was thinking of joining the Royal Navy when he was called up in August 1941 but his dad told him: “Go in the Royal Marines … they have it easy.”

Maurice discovered the hard way how wrong his dad was as their training started on bleak Exmoor and he recalls an especially tough two weeks training in the Welsh mountains when he was wet through from downpours almost the entire time – and the Marines had no waterproof clothing back then. Eventually Maurice became a crack sniper, coming second in a competition for the top 40 Marine snipers.

“The winner was a great shot,” says Maurice. “Mind you, he was a Scottish Laird’s son so he should have been.”

Maurice was awarded the Legion D'Honneur medal from France in March 2017 to honour his D-Day exploits.

Harry did though introduce Maurice to rugby league, taking him to see the Australian national team play Bradford Park Avenue in 1933 when he was 13. It was on a Wednesday so he needed to bunk off school.

“Dad asked what my main lesson was that day,” said Maurice. “I said it was history which I told him was ‘just one thing after another’ so I took the day off and even though Bradford were bottom of the league they beat the Australians 7-5.”

Maurice was hooked, going to games both home and away for decades and is now thought to be Bradford’s oldest supporter.

And he has widened his love of sport to even include American football, but does draw the line at one.

“I love all sport except rugby union,” he said. “I think it’s rubbish. It’s scrum after scrum which can be so dangerous.”

During the war when gales stopped them training at sea in the run-up to D-Day Maurice recalls a captain getting the men together to give them ‘a treat’ and when they went to the room he revealed the treat was he was planning to give them was a lecture on rugby union.

“He was met by a gale of laughter,” said Maurice. “We were all rugby league men through and through.”