Huddersfield has some wonderful charities and AH! PR is committed to helping two of them achieve maximum publicity – it’s our way of giving something back for the all the great work they do.

One is the Laura Crane Youth Cancer Trust and the AH! PR feature on inspirational cancer survivor Sarah Dransfield is now live on The Huddersfield Examiner website.

Here’s the feature in full that Kirklees-based PR agency AH! PR wrote and submitted to the Examiner and other media on their behalf.  Here is Sarah pictured with boyfriend Phil Lyons. 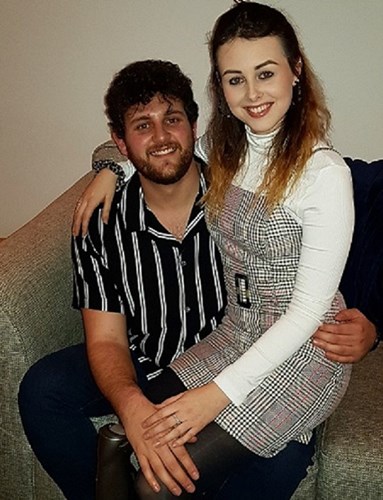 Sarah Dransfield may have lost a leg to cancer but she knows she is one of the lucky ones.

After undergoing the terrible trauma of losing her right leg at the age of just 16 Sarah was then hit with a second blow that the cancer had spread to her lungs.

A year of gruelling chemotherapy saved her life but she has met several other young cancer sufferers along the way who have not been so fortunate.

Sarah knows there are other youngsters aged from 13 to 24 going through the same trauma now which is why she is doing all she can to help them.

The 23-year-old from Holmfirth said: “I have had a few instances where friends have not made it. I often think the treatment worked for me so why didn't it work for them?”

Sarah - who was educated at Holmfirth High and Huddersfield New College - spends one day each week working for the Huddersfield-based Laura Crane Youth Cancer Trust (http://lauracranetrust.org/) and is eager to get out and talk to as many high schools, sixth form colleges and universities as possible to spread the message that cancer can strike the young.

And when it does it can often be far more aggressive and difficult to treat which is why the Trust not only raises money to help young cancer patients in hospitals but also funds pioneering research into ways to try to fight the disease in younger people.

Sarah has had her dark days. After her operation and treatment she found herself two years behind her peers who had all left college. She had put on weight, felt unattractive, hid her prosthetic leg beneath tracksuit bottoms and just didn't want to talk.

That was in 2012. Fast forward seven years and Sarah's lack of confidence has been replaced by a new glowing sense of self-esteem, she is happy to talk, wants to get out there and spread the Laura Crane Youth Cancer Trust message and the last thing she now does is hide her prosthetic limb. And by doing so her message is simple. Yes, I'm disabled so accept me for who I am and apart from my leg I'm no different from anyone else.

Sarah said: “Before all this happened I was really quite shy and struggled to speak in front of people. That's all changed even though I still have days when life can be a struggle and I think why me? My diagnosis was quite late because the pain was initially diagnosed as a sprain and it was a physio who advised me to pay for an MRI scan because she felt heat in the leg. By that stage the tumour had taken hold of my knee and it felt all bubbly round the back of it. I sometimes wonder if it had been caught earlier would I still have my leg? That's the big unknown and I try not to think about it too much.”

Sarah won the nation's heart with this attitude when she appeared on a tear-jerking episode of the Channel 4 programme First Dates two years ago when she met Phil Lyons from Warrington who had lost his mum to cancer when he was just 17.

It came at a point when Sarah was starting to feel more confident about herself and took the decision to walk into the restaurant with her prosthetic limb in clear view.

“I never thought I would go on there and meet someone and it was one of the most nervous I'd ever been in my life,” said Sarah. “But in the last two years I've done so much I wouldn't have done if I hadn't been with Phil. He's so incredibly supportive and we've been to Turkey, Poland and music festivals. It's transformed my life and eventually we would like to live together but it's a case of trying to get him over 'the hill' and into Yorkshire.”

Sarah has just got a new leg with a microprocessor knee powered by precision engineering to help her to walk. She has to charge it up like a mobile phone at night but that battery power then senses the pace she is walking and helps power the first part of each step to ease the pressure from Sarah's right thigh.

She has a bright pink sleeve covering the remaining part of her leg – Sarah isn't one to hide behind her disability – which takes the pressure off the end of the bone and puts it on the top part of her right thigh.

When it comes to putting her shoes on all she has to do is push a button which lifts the leg up to her shoulder height and swivels it around to make it easier to put her footwear on. She's had to learn to put her shoe on backwards though.

The micro-processing unit and calf costs £14,000 – and that's before the foot and the top part which fixes onto her limb.

Nothing will stop Sarah. After a spell at wheelchair-racing she now has a blade and aims to get running on it this spring and would love to join a running club.

“It's amazing,” she said. “After trying a blade out for just five minutes I was running on it. I used to be a fast runner before losing my leg so I fancy getting back to sprinting.”

Sarah spotted an agency called Zebedee Management which was looking for models with disabilities. She contacted them and has done her first modelling shoot for River Island with her photos appearing in the autumn and Christmas collections.

She said: “I was there in London, this new girl from Yorkshire and found myself with girls who modelled for the likes of Pandora and had just done New York Fashion Week. They had all the right moves and kept asking me who I'd worked for before so in the end I admitted it was my first job and I wasn't a trained model.”

They'd have been shocked if she had told them where she actually works as Sarah's mum, Hazel, and aunt Jane Atkinson own the famous Marstons chicken shop on Leeds Road in Bradley and Sarah works there three days a week. It was set up by her grandad, John Marston, who is now 83 and after farming at Kirkheaton decided he fancied a change around 35 years ago. At first he planned to open a butchers shop but then changed his plans into the chicken shop after reading about a successful fried chicken shop in Scarborough.

Ironically, Sarah's next job through the agency was as an 'influencer' for McCain Chips. She had to film herself cooking up a McCain's meal and then post it on Instagram.

So what's next for Sarah?

“My ultimate job would be as a TV presenter,” she said. “Now that really would get my leg out there!”

* The Laura Crane Youth Cancer Trust was set up in memory of Huddersfield student Laura Crane who was diagnosed with four types of cancer and died in May 1996 aged just 17. Her family wanted to help other young victims of cancer.

Anyone wanting to invite Sarah to give a talk should contact the Laura Crane Youth Cancer Trust on 01484 510013 or email hello@lauracranetrust.org

Some schools then hold non uniform days to raise money for the Trust or choose it as their charity of the year.