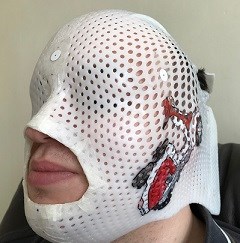 Ryan Holland wearing the special mask he needed for radiotherapy

THE emotional impact of battling cancer took a 21-year-old so low he fell into a deep depression.

The devastating toll fighting a serious illness can be so all-consuming on a person’s body and soul there’s hardly anything left once it’s all over.

That was certainly the case for Ryan Holland who went through a nightmare ordeal after discovering he had a brain tumour - and says the support of several charities helped him out of a very dark place emotionally.

Ryan, of Elland near Halifax in West Yorkshire, has revealed he’s not alone as he’s met many other young cancer survivors who have been shocked at how depression and anxiety have set in after surviving the greatest battles of their lives against cancer.

He’s now set up a self-help group via the cancer charity Candlelighters to try to support others through this agonising time in their lives – a time when to most outsiders they should be feeling good about themselves.

Ryan had just finished his A-levels at Brooksbank School in Elland and had started as an apprentice engineer at a refrigeration company in July 2016 when he suddenly blacked out and collapsed at work. He had no idea what was wrong and his grandparents went to collect him in their new black Citroen Berlingo.

Ryan – who talks about his life with both honesty and humour – said: “In hindsight with what was to happen to me I have to look back and smile because that car sure looked like a hearse when they packed me off in it to get me to hospital.”

Initial blood tests at Calderdale Royal Hospital showed nothing so he was allowed home but days later went to his GP who sent him straight back to hospital for a CT scan.

Ryan recalls: “He seemed to be obsessed about my eyes and I realised I’d been tired and lethargic for days. I just wanted to sleep.”

After the scan he was transferred in the early hours of the morning by ambulance to Leeds General Infirmary. Once in the Jubilee Wing there Ryan and parents Richard and Noreen Holland were taken into a side room where the consultant neurologist showed Ryan’s brain scan on a big screen, pointed to a tumour the size of a walnut in the middle of his head and said they would need to operate to relieve the pressure and take a biopsy to see if it was cancerous or benign.

Ryan’s parents were shocked but he can only remember shrugging his shoulders and muttering a resigned “OK.”

“It’s not that I could have done anything about it,” he said. “When you’re facing something like this you have no control over it. At that point I was so groggy it never occurred to me that they’d be actually drilling through my skull.”

Ryan says there’s a dark humour to some of the things he went through … the kind of humour he says teenagers love.

He recalls: “Just before I went into the operating theatre a nurse said ‘put this gown on because we don’t want to see your bum’. All I could think was that surely my bum isn’t that bad – I thought it was OK, actually.”

And when he came round from surgery, in his half-asleep state he was convinced he was in a field hospital at the Battle of Waterloo in 1815.

“It was so strange,” said Ryan. “I’ve seen the film the Battle of Waterloo and there’s no field hospital scene in it so I’ve absolutely no idea where that came from.”

The scan results showed the tumour was “benign with malignant tendencies.”

“I didn’t even know what benign or malignant meant,” said Ryan. “But it meant they’d need to get rid of the tumour and that needed both chemotherapy and radiotherapy. I then had an appointment with my oncology consultant a few days later who confirmed I actually had a rare form of brain cancer. It was such a rare tumour the medics said they only saw a couple of cases like this in the north of England every five years.”

It was a long, tough ordeal for Ryan with some chemotherapy sessions lasting seven hours along with radiotherapy – and that’s when he often sought solace and an escape into some kind of normality in a special teenage room at St James’ Hospital in Leeds provided by Huddersfield-based Laura Crane Youth Cancer Trust (http://lauracranetrust.org/) where he could watch TV and play computer games.

“It brought a sense of normality to a time of my life that was so daunting and scary,” said Ryan.

He needed a special mask to keep his head totally still for the radiotherapy and it was personalised by play specialist Lobke Marsden who can paint anything the patients want on it with the paints funded by the Laura Crane Trust.

Ryan loves his Mod music such as The Jam and The Who so went for a scooter on his mask much to his dad’s irritation as he’s from a biker and heavy metal background.

“It was a great way to wind him up – after all isn’t that what kids are supposed to do?” said Ryan. “Even better, he couldn’t have a go at me because I’d got cancer. He just kept shaking his head and saying ‘I don’t know where we went wrong.’”

The treatment worked, the tumour was destroyed and on December 23, 2016 Ryan rang the famous bell at St James’ Hospital to signify his treatment had finished. There is now just a 4% chance that the cancer will return.

Ryan thought his life would then get straight back on track … but it wasn’t to be.

He felt he returned to work too early which had an impact on his mental health and he left, but quickly started to feel low. This descended into anxiety and depression with Ryan feeling he had no self-worth.

Charities then helped him to turn his life around and gave him a new sense of purpose.

He went to Andy’s Man Club (http://andysmanclub.co.uk/) at the Shay Stadium in Halifax where men are encouraged to talk about their feelings and emotions and ways to feel more positive about themselves and their lives. As Ryan told his story he felt tears streaming down his face and the burden starting to lift from his shoulders.

He also joined other young cancer patients on an outdoor pursuits week in the Lake District run by the charity Climbing Out (https://climbingout.org.uk) which aims to rebuild confidence and self-esteem in young people aged 16 to 30 who have been through a life changing injury, illness or trauma.

This was organised by the Teenage Cancer Trust (https://www.teenagecancertrust.org) and on the course Ryan quickly discovered he was far from alone in feeling so down once cancer treatment had finished.

“It turned out to be the best week of my life,” said Ryan. “I felt to really move forward afterwards. When you are going through the treatment it’s like a tornado – there’s no time to stop and think about what will happen afterwards. When that day finally comes most people realise they have to totally rebuild their lives.”

So fast forward to today and Ryan spends one day a week volunteering for the Candlelighters (https://www.candlelighters.org.uk) children’s cancer charity at its family support centre in the Clarendon Wing at Leeds General Infirmary.

Through the charity he’s set up his own peer support group for other cancer patients aged 18 and over. Ryan can be contacted via Candlelighters.

He’s also a speaker for the Clic Sergeant (https://www.clicsargent.org.uk) cancer charity for young people. He gave an off-the-cuff speech at the Laura Crane Youth Cancer Trust ball which had people in tears.

“I didn’t think I was that bad – until they said it was tears of laughter,” said Ryan. “If I’d not had cancer I’d now be in a job earning money but my life has gone down a different route. It’s mainly volunteering and by doing so I feel I’m helping to make a difference to people’s lives and that’s enriched me in so many different ways.”

* This feature has been published by The Huddersfield Daily Examiner and The Halifax Courier.