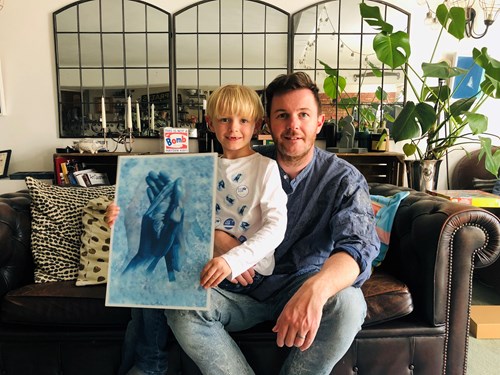 It’s fast becoming the landmark tribute to frontline workers during the coronavirus crisis … and it’s now a way that people who have been clapping every Thursday can donate money to the NHS.

A striking animated image of giant blue clapping hands is being projected in a Batman-like beam onto buildings nationwide to say thank you to health staff and all the other people who have kept frontline services going.

The idea came from six-year-old Elliott Berry who loves clapping for the NHS and when his artist dad, Ian, made the distinctive blue hands from denim – a material he uses for all his highly distinctive artwork - Elliott had the idea to project it onto buildings.

The idea quickly took off and the clapping denim hands are now being projected across the UK and worldwide from Brazil to Sweden.

People who see it and love it can donate to help NHS charities by going to https://www.iclapfor.com/donate

Ian, 36, said: “It’s great that people support the NHS by clapping but we’ve tried to take it to another level by projecting onto buildings in the hope that people who clap will now think about donating as the NHS really does need the money along with the moral support. A fiver from every family who makes that effort every Thursday will mean such a huge difference. We know from Col Tom Moore raising more than £33m for NHS Charities Together that the  public’s enthusiasm for donating is there but just needs something to focus it. Clapping is that focus at the moment.”

Ian is also giving people the chance to say who they are clapping for – be it friends, relatives, frontline workers or medical staff that have saved their lives – and the messages can also be projected onto buildings or posted on social media. Ian does this by posing the question, ‘who do you clap for?’ using the hashtag #iclapfor on a special website https://www.iclapfor.com

Here’s just one message on the website that sums it all up: “I clap till my hands hurt for all the people who don’t realise they deserve it.”

Ian said: “When it comes to our hands we were told to wash them, not to hug with them, to not greet with them, so what did we do with them? We clapped them.”

It all began when Elliott took a photo of Ian clapping. The London-based artist who hails from Huddersfield in West Yorkshire turned it into artwork using denim and then projected it on a building near their home.

Projectionists across the UK saw what he’d done and then did the same in their towns and cities from Edinburgh Castle to Canary Wharf in London … and the idea has now gone global with projections in Brazil, Sweden and the USA.

Ian said: “I know several people who have caught coronavirus and so wanted to thank the NHS workers and all the other frontline workers from bus drivers to supermarket staff.

“This all started because Elliott loves clapping. He gets so excited every Thursday night and he now sees NHS workers as superheroes. When I finished the artwork Elliott wanted to see it on a projector. The next minute we were beaming it off our balcony onto a building and an idea was born.”

“Now, with the help of friends, family and followers, a piece of art showing a simple clap has been projected on walls across the world. It’s truly incredible what humanity can do when we all come together, but it doesn’t stop there. Let’s expand this movement of gratitude and the idea of the clapping hands artwork will continue to evolve in the months ahead.”

Projectionists wanting to contact Ian so they can project the clapping onto buildings in their areas can do so by going to https://www.iclapfor.com/projections

Ian is famous for making art out of denim jeans and was named a top 30 artist aged under 30 in the world. His work, exhibited in galleries and museums worldwide, often depicts scenes of isolation and the ever-changing urban environment such as launderettes and pubs. His portraits of racing legend Ayrton Senna and pop superstar Debbie Harry made entirely out of jeans stunned the world when they were first unveiled.

This press release and the photos were used extensively, including: